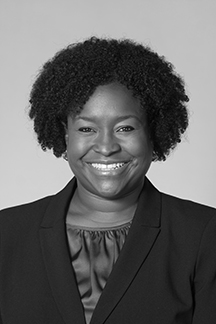 Prior to the Entrepreneurship Clinic, she taught in the Law School's Urban Communities Clinic, where she represented small businesses, startup ventures, social enterprises and community-based organizations, primarily based in Detroit.

Her article "Accelerating the Growth of the Next Generation of Innovators" discusses the importance of campus incubators collaborating with law school clinics and was published in the Ohio State Entrepreneurial Business Law Journal in 2013. She is a contributing author to Building Healthy Communities: A Guide to Community Economic Development for Advocates, Lawyers and Policymakers, published by the ABA's Forum on Affordable Housing and Community Development Law. She is also the author of the article "L3Cs: An Innovative Choice for Urban Entrepreneurship and Urban Revitalization" published in 2013 in the American University Business Law Review. The article explores the role that low-profit limited liability companies, also known as L3Cs, could play in establishing viable minority-owned urban small businesses.

Governor Thompson also writes on entrepreneurship, social entrepreneurship and small business legal issues and has commented in numerous media interviews about such issues.

Prior to entering academia, Governor Thompson practiced at Morrison and Foerster, LLP in San Francisco, then at Miller, Starr and Regalia, where she specialized in commercial real estate and corporate law. She then joined the Nature Conservancy as regional counsel where she represented the organization on land conservation transactions.

Governor Thompson sits on the Bryn Mawr College Presidential Advisory Council. She is the immediate past chair of the Community Economic Development Committee of the American Bar Association's Business Law Section and is a past co-chair of the Legal Educator's Committee of the American Bar Association's Forum on Affordable Housing and Community Development Law. She also is the immediate past cochair of the Association of American Law School's Clinical Law Section's Awards Committee. In addition, she served on former Michigan Governor Jennifer Granholm's emerging Small Business Leaders and Entrepreneurial Council.

A globally conscious academic, Governor Thompson, studied in South Africa during her law school years researching sexual assault laws as South Africa was preparing to come of age democratically and after the creation of its first democratic Constitution. She did her research at the University of the Western Cape examining ways to improve South Africa's sexual assault legislation.

Governor Thompson received her AB in Political Science and French from Bryn Mawr College and her JD from the University of Michigan Law School where she was an editor of the Michigan Law Review. She is married and she and her husband have a son.