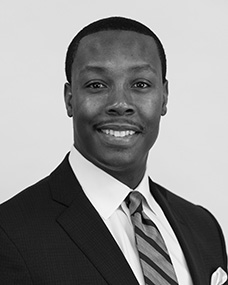 Bryan C. Barnhill II, is a purpose-driven leader with a passion for bringing transformational impact to systems and organizations. Bryan currently works in Ford Smart Mobility's City Solutions Group, where he plays a critical role in shaping the creation of Ford's urban eco-system for mobility innovation in Detroit.

Prior to joining Ford Motor Company, Bryan worked in Mayor Michael Duggan's administration as the Chief Talent Officer. Before working in the mayor's office, Bryan was the campaign manager for the Duggan for Detroit campaign. As campaign manager, Bryan led the historic write-in campaign victory for Mayor Michael Duggan. He has also served as Chief of Staff, and Director of Policy & Legislative Affairs in the Detroit City Council President's Office. Bryan has also worked at Southwest Housing Solutions in Detroit, and at Kushner Companies in New York.

Bryan is on the board of directors for the United Way of Southeast Michigan. He is also on the board of directors for the Detroit/Wayne County Stadium Authority, the Detroit/Wayne County Port Authority, and is Chairman of the Detroit Building Authority. He is a gubernatorial appointee to the State of Michigan Blue Ribbon Panel for Parks & Recreation spaces, as well as the Belle Isle State Park Advisory Board. Bryan is the treasurer for the Iron Belle Trail Board of Managers.

He is a recipient of the Washington Post 40 Under 40 award, the Michigan Front Page's 30 under 40 award, Crain's Detroit 20 in their 20's award, the Payne-Pulliam Door Opener award, and the Spirit of Detroit Award. He was a "Men of Excellence" honoree by the Michigan Chronicle and has also received a Certificate of Congressional Recognition from the office of Congressman John Dingell.

Bryan is a Michigan State University Institute for Public Policy and Research Michigan Political Leadership Program Fellow. He was selected by the Detroit Regional Chamber of Commerce to be part of the inaugural cohort of Harvard Business School's Young American Leaders Program.

Bryan has a Bachelor's Degree in Government from Harvard University with coursework in corporate financial accounting from the Massachusetts Institute of Technology. He has a Master's of Business Administration from the University of Michigan Ross School of Business with a concentration on finance and entrepreneurship.

Bryan is active with the Harvard College Alumni Association as an alumni interviewer for local applicants to Harvard College. Bryan is part of the MWPHGL Abiff Lodge #21 where he currently serves as a lodge officer. He also frequents Jabs Boxing Gym in Eastern Market.

Bryan is a proud Detroit native, and currently lives in Detroit with his wife Rian English, and their two children, Britton and Riley.